The drive that Bas and René share is fantastic!

Who are these cpmVision founders? In a frank and open conversation, we find out that they’re addicted to their families, enjoy their work enormously, and like to interfere with everything. Meet Bas Ranzijn and René Berends, the creative geniuses behind cpmVision.

Bas Ranzijn, a driven, passionate sportsman, and professional busybody who knows all there is to know about his chosen discipline, had been pondering an idea for some time. His ‘Ironman’ mentality shows he is a real go-getter, who wants to know all the ins and outs of a business and likes getting the best from himself and others.

“I am extremely driven and get involved in everything. Not everyone appreciates that. However, I want to know each detail. From marketing to sales, from roll-out to financial services, I am genuinely interested. That’s my strength, although I do tend to have an opinion about everything. Like the speed skater Rintje Ritsma, I don’t win a single distance, but do end up as the overall skating champion.”

René loves puzzles and has been an IT and technical entrepreneur for 30 years. He has been working at iqbs Solutions for 13 years and knows all there is to know about Business Intelligence. He met Bas while they were working on a joint project.

Eighteen months ago, they started cpmVision together, founded on the companies iqbs Solutions and Satriun:

“The idea for the cpmVision product came about in 2011,” says Bas, “As an IT Auditor, I have always worked in technology and been interested in databases, which I thought would be fairly easy to link. At that time, no one was really interested in this, but the idea remained in the back of my mind.”

When working on a joint project Bas was delighted to meet an IT person who could also talk finance. The two found common ground and complemented each other very well.

René: “I am very opportunistic, so I soon said ‘yes’ to Bas’s plans. Working with Bas comes naturally; generally, half a word is enough.

In November 2019, Bas and René developed their concept in almost no time at all. They decided to pitch their new product to their partners and supporters and developed a demo over the course of a week. “That was pretty exciting,” says René. Bas was more level-headed,

“I couldn’t imagine anyone would shoot this down, as it’s such a good idea. I still have the initial notes from two years ago. In fact, I had the first draft, dated November 2019, framed!”

The idea was sold so well that even the most skeptical partners were immediately convinced. René: “That went extremely smoothly, and we just kept going! In February 2020, we were pitching the idea to potential customers!”

You landed your first customer. How was that?

After the internal pitch, Bas and René decided that they were going to do things properly! “Together, we set up a private limited company on a 50-50 basis and went in search of the right people to work with. Bas takes care of functional interpretation, and I am the technical inventor. Our sales and marketing director Otis is particularly important for everything related to marketing and commerce. And let’s not forget our general manager, operations manager, and the outstanding Development Team! We gave demos everywhere and made small improvements each time. We became increasingly enthusiastic about our own story,” says René.

In the summer of 2020, they had developed their first proof of concept. The demo was constantly being improved and expanded. “We closed cooperation contracts – there were no sales yet, but we were having small successes. In August, we welcomed our first customer and celebrated! We were in talks with the major players on the market. We were seeing a domino effect and thought ‘the work actually needs to be done’. We spent many hours trying to get everything finished”, René adds.

Did you encounter any setbacks?

Bas: “I am always positive. Things were going well, and suddenly you’re a real company and need to start working on marketing & sales. You have to get your processes in order. A good thing, but with so many different people involved, I sometimes found it difficult, because I am involved in all aspects. I don’t just say yes to everything. Letting go is a challenge. I know that the people we have hired can do certain things much better than I can. I certainly don’t mind offering guidance. If something goes wrong, you simply get over it and learn. The drive that René and I share is fantastic!”

What is your key strength, René? What drives you?

“Not giving up! We cooperate so well because we have the same attitude. We have similar companies that are successful and operate professionally. The level of intellect is high, and we take real pleasure in work. You find each other, people are equal.”

The two see the basis of the success in the fact that they get along so well. René: “We became friends because of our professionalism, Bas would fit in easily with my group of friends.”

Where do you see yourself in two years?

“iqbs Solutions is working on a strategic plan, in which cpmVision is included,” says René. “We had made turnover predictions and we are already at a much higher level than expected. We want to bring in more customers so that cpmVision can keep growing!”

“In two years’ time, the company should be taking care of itself. I want to stay involved, but the engine needs to be running. cpmVision is to be a self-developing product. And we already have plenty of ideas for a second and third cpmVision product.”

Another link to the Ironman triathlon! cpmVision has just finished swimming, is now mounting a bike, and will start running next. Bas and René are certainly not done yet.

Bas adds: “We plan to attract even more people who are actually much smarter than we are. Our knowledge is far deeper than it was in the beginning. This isn’t the case in terms of seniority. We want to hire smarter people so we can focus on other things.”

Are the new ideas also based in Finance & IT?

“Yes indeed”, says René. “This product places us in the business world’s Major League.” According to Bas, this is where he and René differ: “I am still much more focused on helping customers. Fortunately, René is more commercially-minded, and we have Otis who will take the product to the market.”

René adds: “But I’m still a consultant at heart and always want to help the client.”

Thanks to the combination of the perfect working atmosphere, solving problems together and the vast efforts of the entire team across the board, the two will achieve even more success in the coming period!

Otis is Sales & Marketing Director at cpmVision. His main focus is to keep translating the sometimes complex technology into added value for the Office of Finance.

Curious why they are so proud?

Take a look for yourself and find out more on us and our solutions on our site.

Be a front-runner with your team in Corporate and Managerial Finance.
Building your future financial bridges starts with the latest insights in finance. 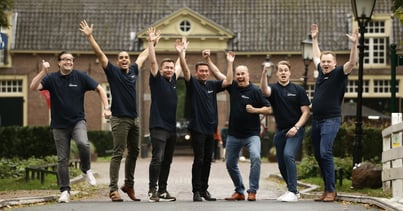